NSMCS elections: Beyond the euphoria of victory 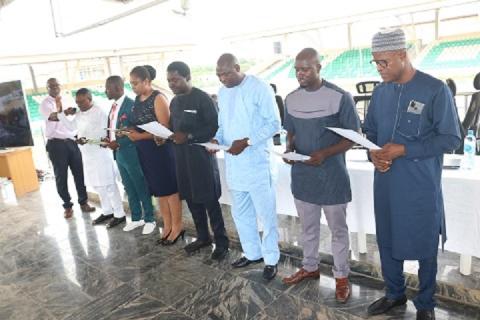 In every contest, one basic thing occurs naturally at the end: the emergence of a winner and a loser. This is natural and there is no doubt about it! In a transparent, credible, free, fair and acceptable election, a winner wins not only on the basis of their popularity but also on the ground of people’s verdict occasioned by the winner ‘s tract record and sometimes their past experiences.

It is safe to say that the 3Cs of leadership; Competence, Capacity and Character can be used as the criteria for determining the winner in any contest.  While competence is the skills and knowledge needed to carry out the assignment, capacity is the ability to do the actual assignment. Character is the springboard that sustains both competence and capacity.

However, one of the facts of life is that, in a contest, a winner today could be a loser tomorrow and vice-versa. This is dependent on so many factors.

While defining leadership, a leadership expert and author of ‘Great Leaders Have No Rules’, Kevin Kruse, provides an all-encompassing definition of leadership. According to him, “Leadership is a process of social influence which maximises the efforts of others towards the achievements of a goal”.

On 6th October, 2021, NOUN Staff Multipurpose Co-operative Society (NSMCS) enthusiastically went to the polls to elect new executives who will pilot the affairs of the society for the next two years as enshrined in the NMCS bye-laws. Elections were conducted peacefully; cooperators voted massively and elected their leaders electronically across the country.

Winners have emerged amidst jubilation across different quarters. Congratulatory messages have been raining on winners like heavy August rain. While congratulations are in order for the new executives for their overwhelming victory at the polls, the new Management Committee of NSMCS should not forget that with leadership comes trust. It is all about selfless service to humanity. The new executives are expected to bequeath good legacies worthy of emulation.

Members always have endless expectations from their NSMCS leaders. They expect them to do more exploit. Record more achievements. Bring more innovative ideas that will bring about progress, which will ultimately translate into cooperators’ overall welfare. Of a truth, meeting these expectations cannot be done on a platter of gold. As such, this administration should consider the following among others.

NSCMS, led by Bala Lazarus Sabo, needs Solomonic wisdom to pilot the affairs of the society and take it to the Promised Land. The administration should, as a matter of necessity, acknowledge God as the only source of wisdom. Wisdom is profitable to direct, guide and instruct. By virtue of this irrefutable fact, Solomon, the wisest king, while acknowledging the importance of wisdom, instructs thus: “Get wisdom and get insight”. He further advises that “Man should not lean on his own understanding but acknowledge God in all his ways”. From all indications, one of the basic things this administration requires in order to succeed is prayer for God’s wisdom and understanding.

Also important is the place of goal-setting. To succeed, this administration should endeavour to set specific, measurable, achievable (attainable), realistic (relevant) and time-bound (SMART) goal and follow it up with sincerity of purpose. They will realise that at the end of the tenure, they will have good stories to tell. It is important to set these goals on time. It could be: one, two, three or four points agenda among others; which should be based on the aims and objectives of the society.

Another major area the administration should quickly and always look into is the implementation of their respective manifestoes, otherwise known as campaign promises. This is where many leaders have failed in our country: they only use campaign promises to convince the electorate with a view to winning the elections and thereafter do the opposite on assumption of office. The Sabo-led management committee of NSMCS should not forget its campaign promises. Pick your campaign posters, go through your manifestos, analyse them, convert them into vision and translate your vision into reality. It is on this ground that an American scholar and author, Warren Gamaliel Bennis, says, “Leadership is the capacity to translate vision into reality.”

There should also be constant and wide consultations. Since nobody has monopoly of knowledge, wide and wise consultations should be embraced as a prerequisite for the success of this administration. Create time to seek counsel from within and without; from experts, other co-operative societies, other financial institutions and so forth. Remember, in the multitude of counsel, purposes are established.

More importantly, co-operators’ welfare should be a priority. After all, welfare is one of the cardinal objectives of the society and this must be pursued vigorously. Apart from bus services, loan to cooperators and dividends to members, this administration should think outside the box and come up with more welfare packages for members. They can get more buses, embark on profitable ventures with a view to creating more avenue for welfare. One bus is glaringly not enough for over 2,000 active members of NSMCS. The society needs expansion. NSMCS should get more buses for commercial purposes (Mass Transit). This will no doubt boost the society’s financial base, which will ultimately bring about improved welfare package for members.

Above all, welcome criticism, especially constructive ones. Criticism, if genuinely handled, helps in putting leaders on their toes, thereby enabling them to do the right thing. It helps to give leaders a new perspective and opens their eyes to things they may have overlooked. If you receive criticism positively, it can help you become better and improve on doing things. No wonder, an Indian author, activist and motivational speaker, Shiv Khera, says, “Wise people prefer to benefit from constructive criticism rather than be ruined by false praise”. In fact, criticism is a blessing in disguise and it must not be shunned completely by leaders in any organisation that wants to succeed.

Once again, while congratulating all the winners of the just concluded NSMCS elections for their victory, the Sabo-led Management Committee should not let cooperators down. Going by their overwhelming victory, they should reciprocate the gesture by ensuring that the right thing is done for posterity’s sake and bequeath a good legacy worthy of remembrance. Remember, according to a leadership exponent, John C. Maxwell, “Everything rises and falls on leadership.”

Ijapari Ben-Hirki is a staff of the Directorate of Media and Publicity, National Open University of Nigeria (NOUN). E-MAIL: ibenhirki@noun.edu.ng